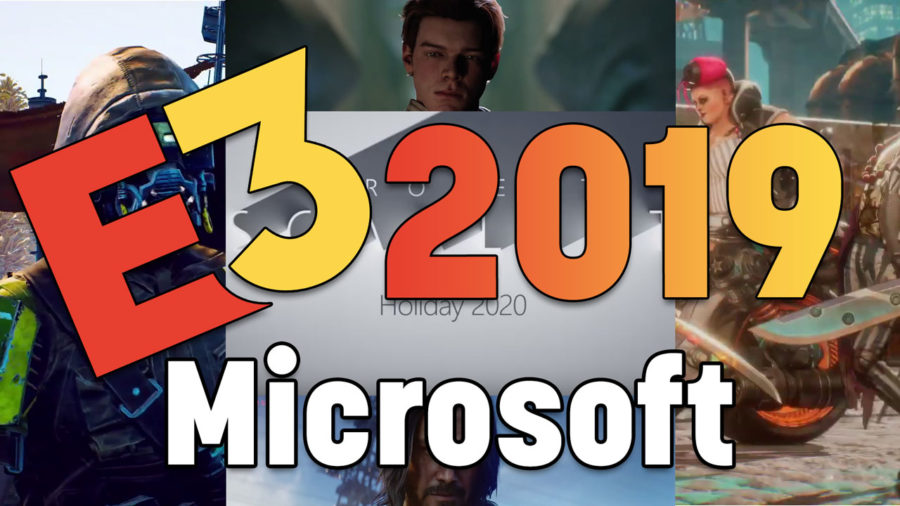 Check out all the news, information, and everything that has been announced on E3 2019 Microsoft Conference.

Outer World is one of the games mentioned in this conference. It looks vibrant and exciting. We did see a new trailer:

Bleeding Edge is a new upcoming multiplayer 4v4 team fighter game from Ninja Theory, creator of Hellblade: Senua’s Sacrifice, and it was announced with a new trailer.

No launch date has been confirmed, but the technical alpha is officially out on June 27 for PC.

Ori and The Will of the Wisps

Not much has been shown for Ori and the Will of The Wisps, but it did show an amazing trailer.

It will be released on February 2020, so that is still half a year from now.

Minecraft Dungeon is an action RPG with Diablo-like concepts. From what we can see on the trailer below, players can do 4-player local and online co-op which will give tons of enjoyment to fans.

No definite date, but it is said to be coming soon on Spring 2020.

One of the anticipated game is the release of a single player Star Wars game, and it is coming soon, very soon. Star Wars Jedi: Fallen Order is being developed by Respawn Entertainment, who is known for its Titanfall series, as well as its battle royale game, Apex Legends.

The question is, how long will the campaign be? Anyway, It is expected to be released on November 15, 2019.

Blair Witch is an upcoming horror game being developed by the creators of Layers of Fear and Observer. We only see a glimpse of what it is, the game is set in September 1996 in the Black Hills Forest. The gameplay akin to Outlast but with a dog (yay!).

Check out the debut trailer:

Cyberpunk 2077 is probably one of the most anticipated games for E3 2019, and boy oh boy, did CD Projekt Red one-upped this year by having Keanu Reeves on both trailer and even the conference itself.

We have learned that the game will be released next year, April 16, 2020. It is a long wait, but, perhaps, it is a game worthy to be waited.

Spiritfarer seems to be a fun management game with building your own, interacting with various characters and elements of the world, but the underlying tone is to bring your animal friends to the afterlife.

The debut trailer is here.

No definite release date, but it is expected to be sometime in 2020.

Battletoads is back in Xbox One platform with an amazingly hand-animated visuals for Rash, Pimple, and Zits. It is a three-player beat-em-up, just like how it is supposed to be, a classic.

We get more gameplay in the new trailer as well:

Unfortunately, no release date has been announced.

RPG Time: The Legend of Wright

Probably one of the most unique announcements so far in this conference is RPG Time: The Legend of Wright. The game basically takes place inside a student’s notebook as it is hand-drawn.

Check out the cool-looking trailer

This conference, Microsoft wants to showcase their Xbox Game Pass, which is now available on PC for $10/month ($4.99 for an introductory price). Basically, subscribers can play any Xbox games on the library, even new games!

Some of the games shown are Dead Static Drive, Pathologic 2, Totally Accurate Battle Simulator, and many more.

Check out this trailer that includes several games for the Xbox Game Pass.

Also, check this out if you want to subscribe on PC.

More games have been shown that will be included free on Xbox Game Pass once they launch, and these games are:

In this conference, it has been announced the Double Fine Studios is joining Xbox Game Studios, and including in this announcement a new trailer for Psychonauts 2.

No release date, but it looks hella promising to be honest.

Star Wars: The Skywalker Saga has been announced as well with a trailer showcasing the goofiness of the game, as usual. It shows different timeline focusing on the Skywalkers, which is basically what is Star Wars is all about, the Skywalkers!

No release date, but it is expected to be out early 2020.

This one is a doozy! 12 Minutes is an interactive thriller about a man trapped in a time loop. It is intriguing, just check out the trailer.

Way to the Woods

Way to the Woods is a beautiful adventure game where you play as a Deer with your Fawn. You traverse a world to get back to your home. It looks amazing, and this is definitely going to be a tearjerker for sure!

No release date for this one as well, but coming soon in 2020!

If you are a huge fan of Xbox, Gears 5 is definitely on your list for most anticipated game, right? Well, we did get a new teaser, a quick one with Kait showing several emotions in the trailer.

A new mode has been announced as well, which is called Escape.

A Terminator Dark Fate crossover character pack has been announced, which is fitting for Gears 5.

It is confirmed to be released on September 10, 2019. You can play it 4 days early if you have Xbox Game Pass Ultimate.

PS: There is also Gears:POP! coming out on IOS and Android so check that one out. Looks like a decent casual game.

Microsoft announced a new Elite Wireless controller called Series 2, which is supposed to be the most advanced controller yet.

It is probably expensive, but it looks awesome though.

Techland provides us a new trailer for their upcoming zombie-parkour game, Dying Light 2. I loved the first game, I even reviewed it. The first game even gets occasional update and free DLC so you know how Techland is so invested with the series.

It is confirmed to be released next year, Spring 2020.

Now this one expansion came out of nowhere! Forza Horizon 4 is an amazing racing game, for sure, but this Lego Speed Champions big expansion is not something everyone would expect.

Reading the comments for the trailer, there is definitely mixed receptions, and quite funny!

State of Decay 2 was released a year ago, and I actually planned to review (probably will), but here comes its second huge DLC, Heartland, which brings you back to Trumbull Valley.

If you have not grabbed it, and you are a zombie fanatic like me, then you are missing something. Well, it is a love-hate relationship with this game, really.

I was surprised to see Phantasy Star Online 2, since I used to play it years ago. Probably because I am living in South East Asia, but hey, it is a good game. It did say in the trailer that all content will be available.

Crossfire X is the first one to be in console in 2020. It is basically a sequel or some sort of a Free-to-play FPS of Crossfire which is widely popular in Asia. Remedy Entertainment is confirmed to be developing a single-player campaign for this game.

Tales of Arise is a brand new game on the Tales of series, and it is looking amazing with this trailer!

Borderlands 3 also gets an amazing chaotic trailer! But there is more! Borderlands 2: Handsome Collection is available on Xbox Game Pass now, as well as new DLC!

Elden Ring is a collaboration of Hidetaka Miyazaki , creator of Dark Souls, and George R.R. Martin! Expect so many deaths in this game for sure!

We only get a glimpse of it in this conference but the trailer is worth watching.

No release date though.

Microsoft has given hands-on to their upcoming Project xCloud, where you can console stream, or play on the go on any device. It will be released on October 2019.

Now, they also mentioned about Project Scarlett, their upcoming console next year, 2020.

It is said to be 4X more powerful than Xbox One X, which is already a beefy console. They even say that it is capable of 8K resolution and 120FPS, which is let’s give them a benefit of the doubt until the release date. Load times should be faster with better equipment. Of course, the backward compatibility is a very nice pitch too.

No more specified price, or shown a prototype, just an announcement.

It launches with Halo Infinite as well.

So that is all of the games and announcements in Microsoft E3 2019! Honestly, it is a better conference than what they had last year.

Xbox Game Pass is a very promising service, I even subscribed now on PC since it is $1 for the first month and $4.99/mo while it is on beta. It even has an Ultimate version if you have an Xbox One for $14.99/mo which gives you more benefits.