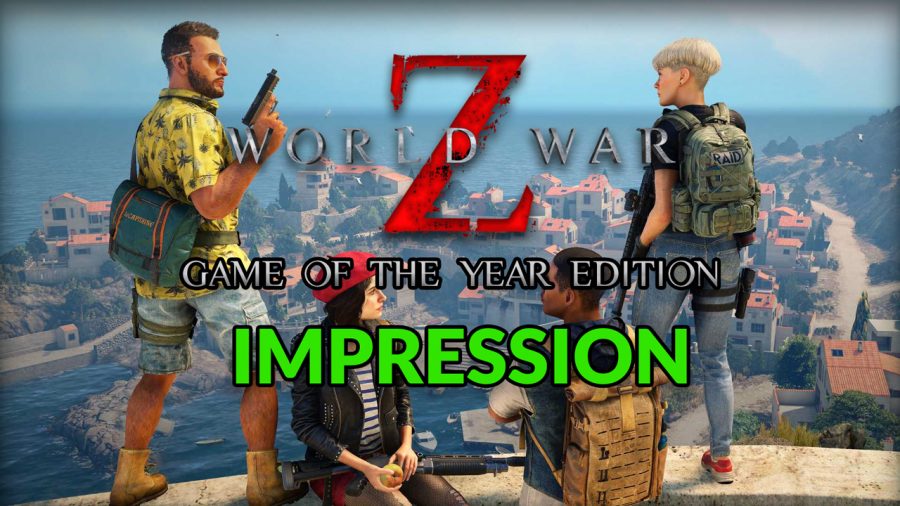 Is upgrading World War Z to Game of the Year Edition worth it? Well, here are our thoughts about it!

Saber Interactive and Mad Dog Games recently launched the Game of the Year Edition for their co-op zombie shooter game, World War Z in early May 2020.

So is it worth getting? Here are my thoughts about this edition.

World War Z: Game of The Year Edition includes all the released free and paid DLCs, such as skins for the characters and the weapons, Horde mode, PVP, and PVE missions. If you have the base game, you already have all the modes available for you except for the Marseille Episode in the campaign.

Let us talk about the weapon skins first, it is actually pretty nice to finally have not spent all of my grinded money on upgrading weapons. In Game of the Year Edition, you get weapon skins that are already the maxed version of the weapon. This is particularly helpful for tier-3 weapons because as you know, they are harder to upgrade since you literally have to look for them during missions or you can only use them on the final parts of the mission where they are available. You can still upgrade your weapons up to the max level since it bears different stats compared to their DLC version.

I finally played different guns due to this fact, and I actually enjoyed the game more because of it. Before, I used to really select particular guns that I can use since I have to upgrade them. Now, I can probably play most of the guns since they have good stats already, and I play most of the missions on Insane difficulty or higher now, so a suppressor is a must.

As for the costumes, the added ones look nice and really different. I wish some of the characters’ unlockable costumes were just like this, or at least have one for everyone. Sadly, that is not the case and only selected characters have a new costume. It is unique, and I like most of them, especially the samurai costume for Tatsuo. Daniel, on the other hand, looks like a villain with the new costume, but hey, it is a subjective preference.

Now, for the main course, it is the new episode, which is the Marseille Episode. The setting is in France and we got new characters! These four have to take on waves after waves of zombies, and I am not gonna lie, the French campaign is actually really amazing. You start off in the streets looking for medicines until you reach the part where you have to defend three entry points of a wave, then help people gather supplies and escape the advancing waves, and that is only the first mission and it is jam-packed already.

The third mission is that the characters are huddled up with other survivors in a fortress. I like this location, it looks very medieval. You are also going underground since the zombies managed to break through a wall, so you have to destroy a section of it to stop them.

The best part of this is the section where you have to traverse a location without any lights. One of you will get a flashlight, and that is the only source of light that you have in this section. This is the first time I felt scared and dreadful in this game, and it is effective. There are two paths for this one and I believe it is based on RNG. One is the typical office location, and the other one is the catacombs. Both are scary, but obviously, the catacombs have this eerie feeling to it. You can easily manage this section if you are a fixer, you can mitigate the scariness since you can stop any hordes coming towards you in this dark hallway as long as you are in a gas mask. If you are unlucky for not being a fixer or not having one in the team, then good luck.

Those are the three missions for the Marseille Episode, it is really fun, creative, and I have truly enjoyed it. There are no alternate costumes for the characters in the episode, but that may be added later.

These are actually all of the added features in the Game of the Year Edition. I know I have said the new episode is fun, and the costumes are superb and the weapon skins are nice to have, but it still lacks content for a game of the year edition.

I wish they brought at least one more episode, so the Season Pass or Game of the Year upgrade sounded more worth it with two or more new episodes rather than one.

They did not even add a new map for the Horde Mode, which is probably my favorite mode in this game. We are still stuck on the airport, and there are a lot of maps they can swap or modify to become a map for Horde Mode, such as the stadium on the New York campaign, or the fortress on the Marseille campaign.

I cannot speak for the PvP, I still feel it is still a dead game mode for me. Also, they have not announced any roadmap for the next year, which makes me kind of worried that this is really the Game of the Year Edition that we will get and nothing more, except the PlayStation 4 crossplay, which they promised. I think they might be focusing more on developing the Nintendo Switch port, so they can release it before the year ends.

Now for my recommendation, if you are going to buy this depends on a few factors. For me, it is totally worth the upgrade since I have played it for another 10 to 15 hours after buying it, and I bought it for only $7.99 on Epic Games Store because I live in a third world country called the Philippines. If you live in the US, you will have to shell out $19.99 for PC, and $29.99 on consoles.

On the other hand, if you do not have the base game, you have to spend $45.99 up to $49.99 depending on whether you are on PC or PlayStation 4 or Xbox One for the whole game. However, if you live in a third world country, for example, the Philippines, you can get World War Z: Game of the Year Edition on Epic Games Store for only $17.99. You can even get it for $7.99 if you have Epic Games $10 off voucher from their recent sale. Also, for the console users, you can just buy the Marseille episode separately for $15.99 if you do not care for the weapon skins and costumes. Is it worth it? Not really, it sounds like you pay $5 for each mission with a length of 15 to 20 minutes of added game time.

I just wish they would add more content until its third anniversary, that would be really worth it.

If you have bought it already, let me know what you guys think in the comment section below. Do you like it or hate it?