Don’t you just love fluffy mascots that almost looks real and can do cool stuff?

You do? Well then, you’ll love this newest game that just recently released its Beta version.

That’s right, Scott Cawthon released the early version of the newest installation for his prequel game, Five Nights At Freddy’s 3.

The game was first announced with a teaser that was posted on Scott’s website last December 06, 2014 and several other teaser followed, the next being and image of a yellow animatronic in disrepair with the words “I’m still here.” 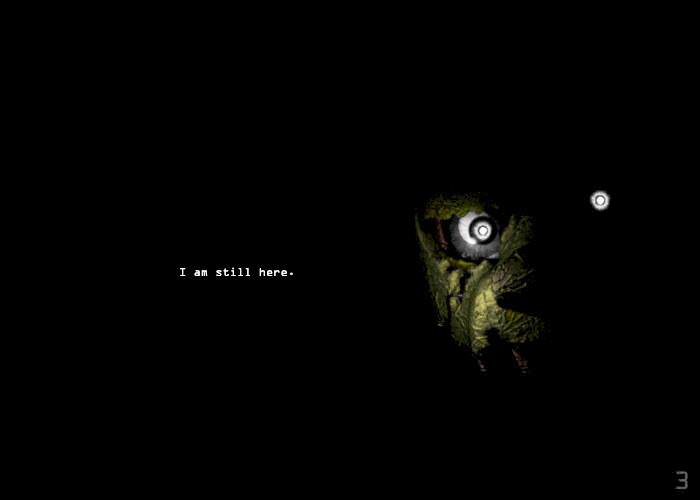 So what’s new about this game?

And that’s not most of them, if you want to learn more, you can always watch the newest gameplay of Markiplier below.

And also, here is a summary of the game:

Thirty years after Freddy Fazbear’s Pizza closed its doors, the events that took place there have become nothing more than a rumor and a childhood memory, but the owners of “Fazbear’s Fright: The Horror Attraction” are determined to revive the legend and make the experience as authentic as possible for patrons, going to great lengths to find anything that might have survived decades of neglect and ruin.

At first there were only empty shells, a hand, a hook, an old paper-plate doll, but then a remarkable discovery was made…

The attraction now has one animatronic.

As you can see, there is also this mini-game at every end of the night you finished where you control the first three original Animatronics. We believe this tells the story of what really happened on this crazy game/business that goes way back from the first business, Fazbears Pizzaria. Could this finally answer all the question especially what really happened to the “Bite of ’87”?

There is only one way to find out. FINISH THE GAME!