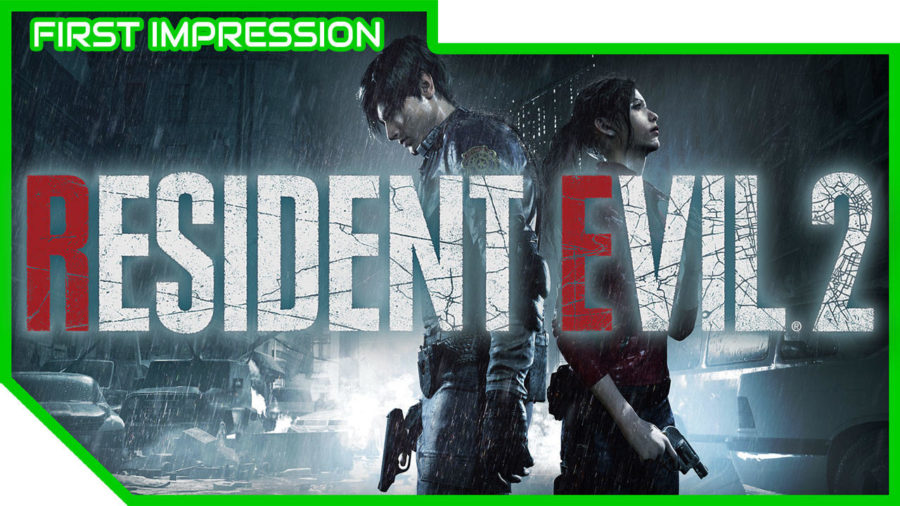 Capcom has released a 1-shot 30 minutes demo for their one of the anticipated remakes, Resident Evil 2! Is it any good?

Resident Evil 2 is one of the survival horror classics back in the first PlayStation era, which was originally released back in January 1998. It is notable known for its Zapping System where players can get different events depending on how you play the other characters. Although, it may not come back in Resident Evil 2 Remake, it will still have Leon and Clair campaigns separately.

Anyway, Resident Evil 2 Remake is on its way this week, and I got a chance to play the 1-Shot Demo that it has (video above). 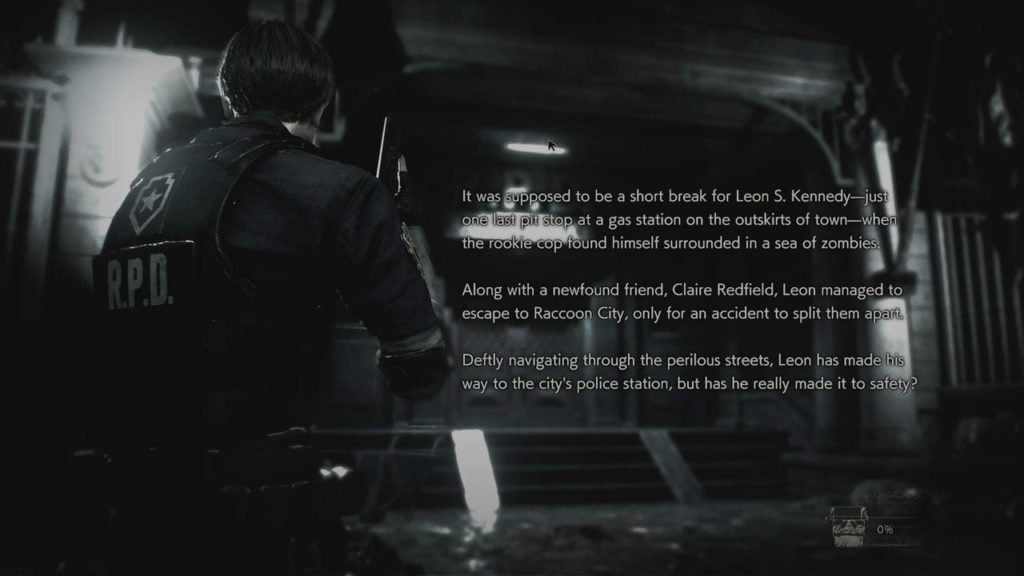 Some contexts for the demo

There is something chilly and terrifying about Raccoon City that still make me scared even today from time to time. I guess because I was so traumatized when I first saw the zombie cutscene back in the original game that the first three Resident Evil games just become so scary to me even decades later. Mind you, I have played countless of zombie games. However, as I started this demo, my blood started pumping, and it gave me goosebumps that we can finally see Resident Evil 2 for all its glory and beauty in a new engine. 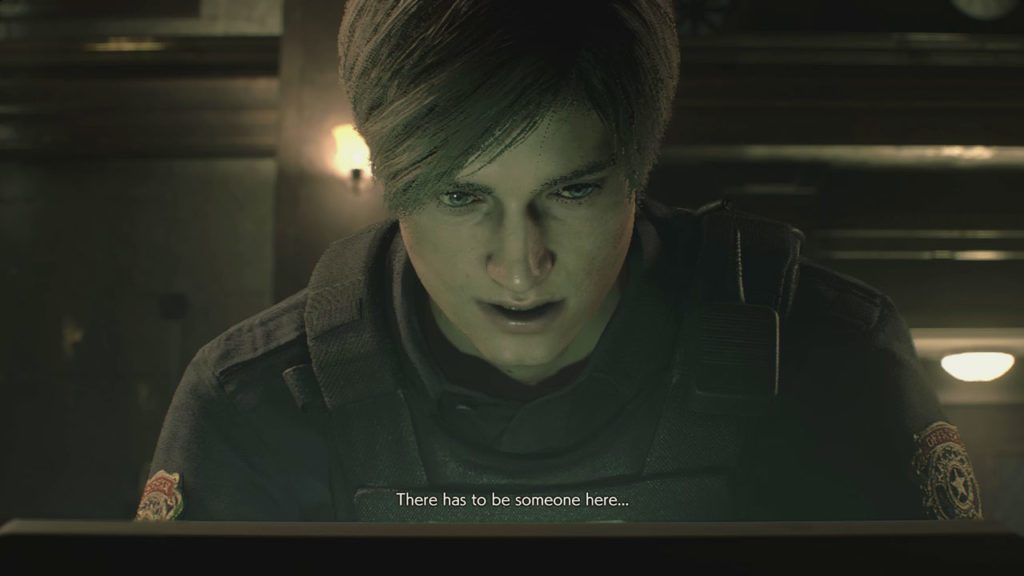 Rookie Leon is back!

The demo focuses with Leon and his time at the Police Station, a classic location in the game where a lot of things happen in the game. I must say, the graphics is amazingly well done in this remake. Although, I have played it safe and turned down most settings to get a smooth recording out of it. Hence the video and images may not look as appealing as I said it to be (Sorry!)

Nevertheless, I can vouch that this game looks amazing, the details are spot-on. I mean, bite marks are visible if you are bitten, the animation is already solid and not clumsy. The faces of the zombies even get disfigured as we lay waste on them, and it just makes them more terrifying. It feels nostalgic and new at the same time. 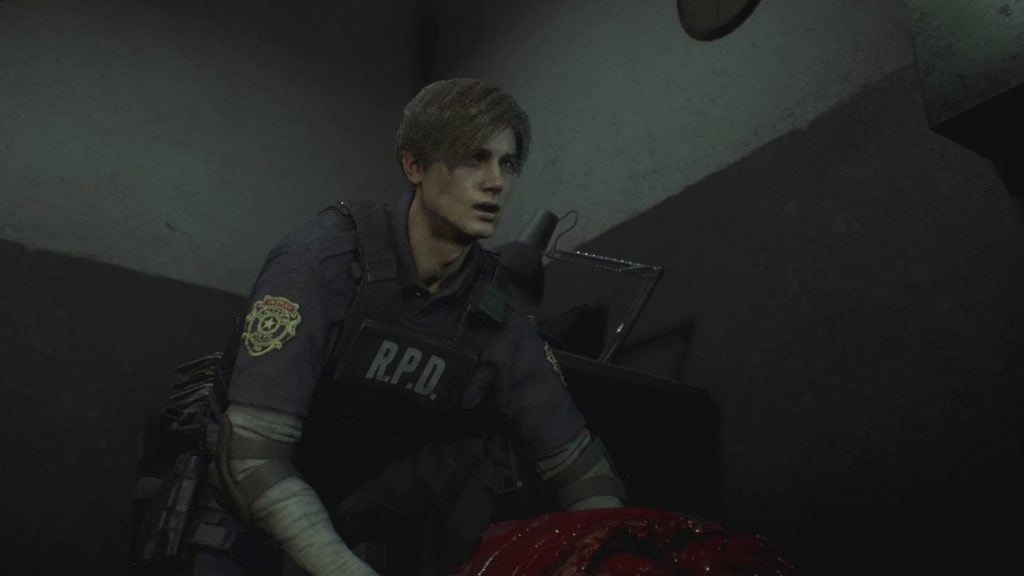 The demo lets us explore the Police Station, although most of the doors are locked since we all know classic Resident Evil game are full of puzzles. I am glad the developers stay true to this too. The first moments of the game shows us a CCTV footage from another officer named Elliot. Apparently, he knows the way out of the Police Station since it is now being run over by zombies. The tension is real as he is being chased by zombies.

We make our way to the right wing of the building where he is located, and my god it is full of blood and dead bodies (and shoes apparently). It is so dark as well, compared to the main hall. It did say Keep Out so it is obvious that this part has already been at least overrun before we even reach the Police Station. We can only assume that Officer Elliot is on this part of the building to get his notes. 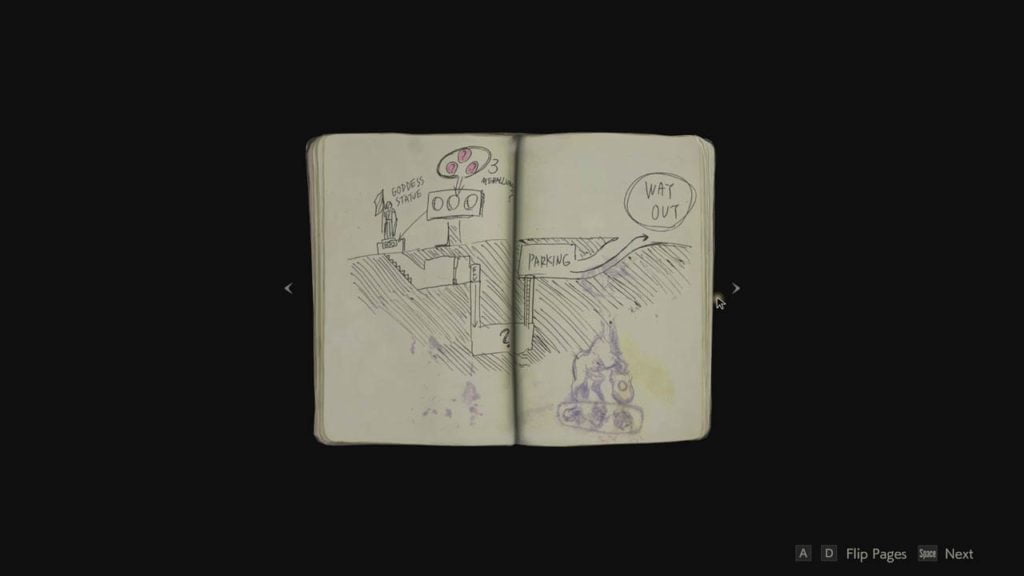 I guess this is worth sacrificing for

Once we reach Officer Elliot, we try to save him and fail miserably. Classic horror trope! I must say, they do not hold back in this as the cutscene is messed up, and I like it. These are zombies, they are ruthless. He is dead, so we get his notes, and here we will encounter the zombies the first time in this demo.

Also, his notes are clues for one of the puzzles. We may solve it or ignore it since we have a limited time here. Apparently, we can solve two of the required items to solve this puzzle, but since it is a demo, and this puzzle is essential to move the story forward, we cannot see it anyway. 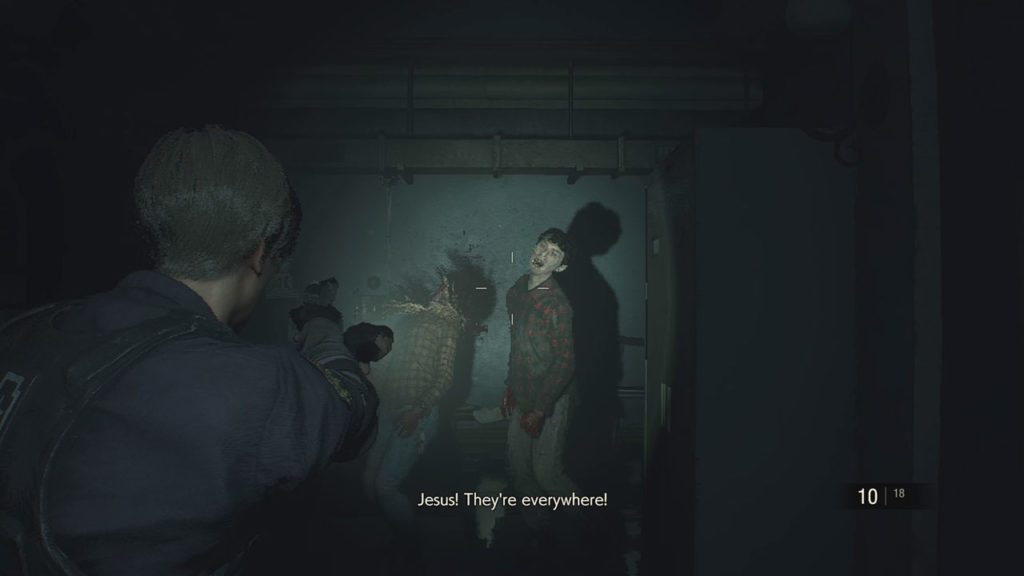 This time, I have realized why the classic Resident Evil games are spine-chilling, and it is because of the claustrophobic areas in the game. We do not feel secure, nor there are spacious areas in the game where we can run away from them. It is still evident in this remake. The halls are tight, and when there are zombies chasing us, it feels like the halls are getting smaller, and the rush just fills us in.

Although, ammo can still be found almost everywhere in the map if we really look for them, it still feels scarce if we are being overrun. Hell, the knife can even break in this game which, I think is quite a nice feature. 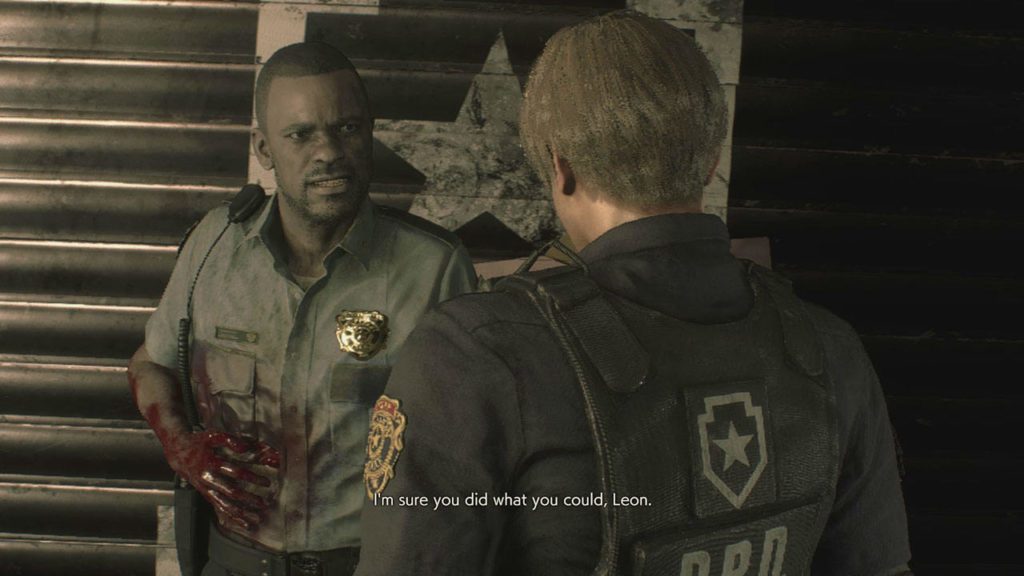 They met in a different place now.

As we escape back to the main hall, we meet one of the surviving high-ranking officers, Lieutenant Marvin Branagh. Although, as we can see he has already been bitten. He gave us our very first knife as well, which we can use to unlock the shutter doors to the west wing. As far as I remember, in the original game, the West Wing is where we basically meet the Licker. However, in this demo, we can only see the aftermath of what it has done to some of the police officers. Although, we will see a glimpse of it later on in the demo.

One of the new features in the remake is that you can board up windows, and it basically stops the zombies from entering the hallways. However, I am not entirely sure if it has durability as well, just like the knife. 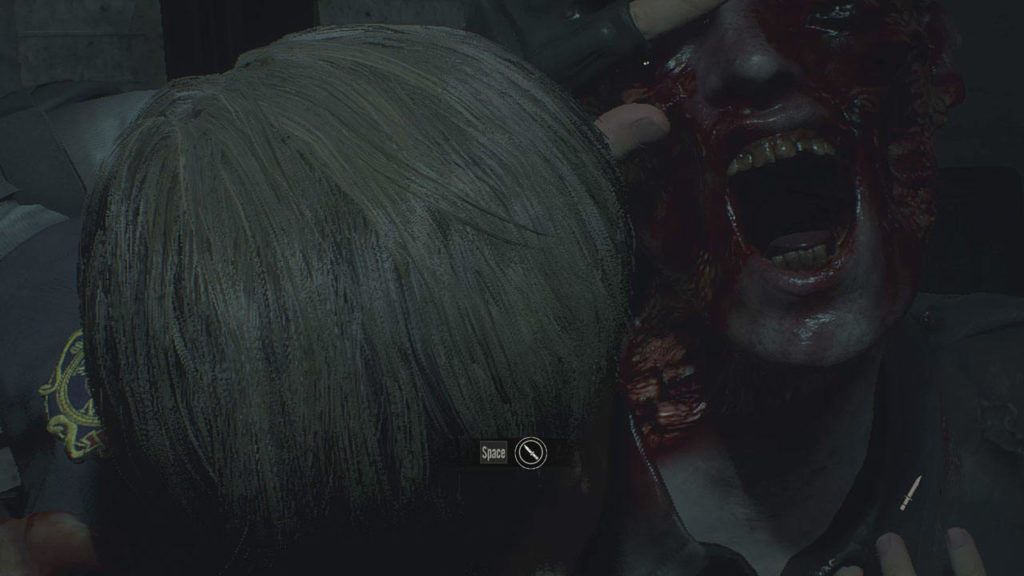 Counter with your knife!

Speaking of the knife, another way to use it in the game is to counter the zombie when they grab us. Of course, we cannot retrieve it until we actually kill the zombie first. However, what I have noticed in this demo is that the zombies keep coming back up unless the head is blasted off. I see zombies coming back up after shooting them in the head 4-6 times. Hell, they usually do not even go back up immediately, and it makes me think that they are already dead, when they are not. I mean it scares my butt off when they suddenly grab my leg.

The rest of the demo is just exploring the West Wing of the Police Station, not much has really happened. We got one of the keys, and if we are keen on solving the puzzles, we may get one of the key items in the West Wing. There are various notes and diary entries on what really transpired in the last hours of the Police Station before it has succumbed to zombies too, which is a nice read. 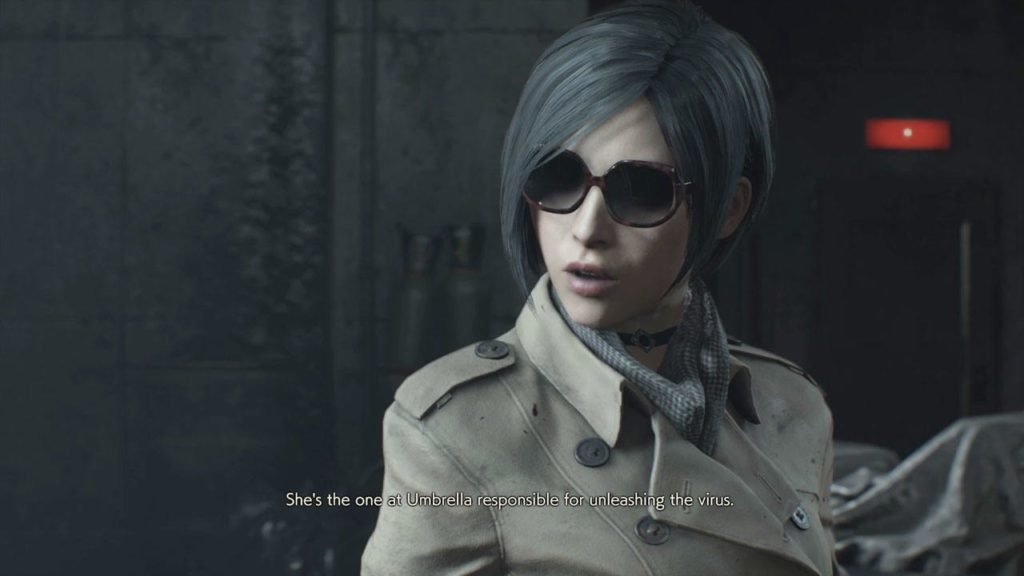 After exploring the West Wing, Lieutenant Marvin asks us to go back to the main hall, but we are ambushed by several zombies on our way back. After destroying the zombies and making sure that they are not going back up, we head back to the main hall, where he will show a footage of Claire Redfield waiting outside of the station. The demo ends there as well and it shows some good teasers for the upcoming game.

Overall, the demo is fantastic, and I would love to play it on release date as it will be released on January 25, 2019. However, the demo will be playable until January 31, 2019. I guess it is also a good way to introduce the player to the franchise if they have not played the original games since this game will introduce two of the most iconic Resident Evil characters on their newbie days.

Monster Hunter Generations Ultimate is coming to the Nintendo Switch!
May 11, 2018