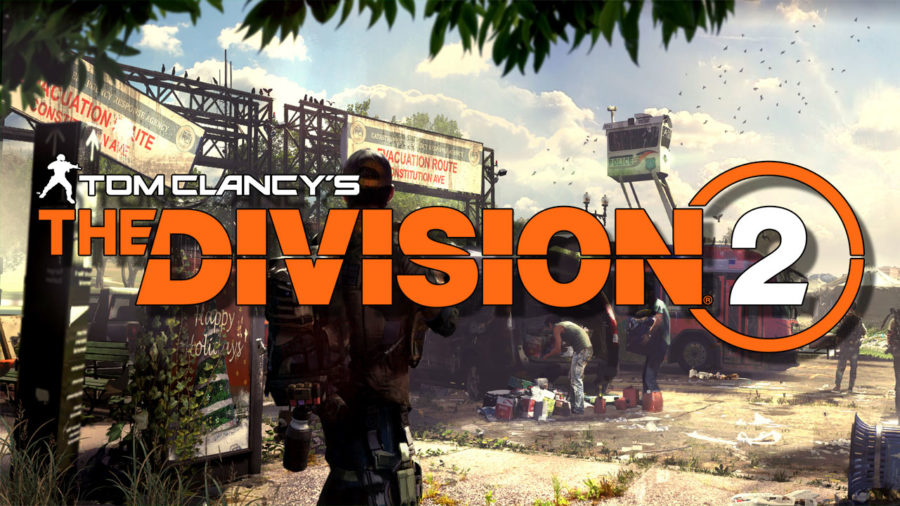 Open Beta will open on March 1, 2019. Here are my impressions for The Division 2 Private Beta from few weeks ago.

As the open beta starts tomorrow, March 1, 2019, for The Division 2, I would like to give my impressions regarding the Private Beta that happened few weeks ago. This impression was delayed because of OBS not outputting my videos correctly, and thus, the video was late.

Anyway, let me tell you that I have never played the first game at all. I just cannot bring myself hours and hours to grind for items, and I have heard that the end game on the first game was lackluster. Now, Ubisoft has told their fans time and time again that they are focusing on the endgame of The Division 2, which is apparent as they give us a glimpse of it on the beta.

The Division 2 private beta was really fun. Technical issues are few here and there, although, some experience glitching and hard crashes at some point of their playing time. Bullets coming out nowhere are apparent as well, but it is probably on the server side, which can be fixed if Ubisoft decides to upgrade their infrastructure. 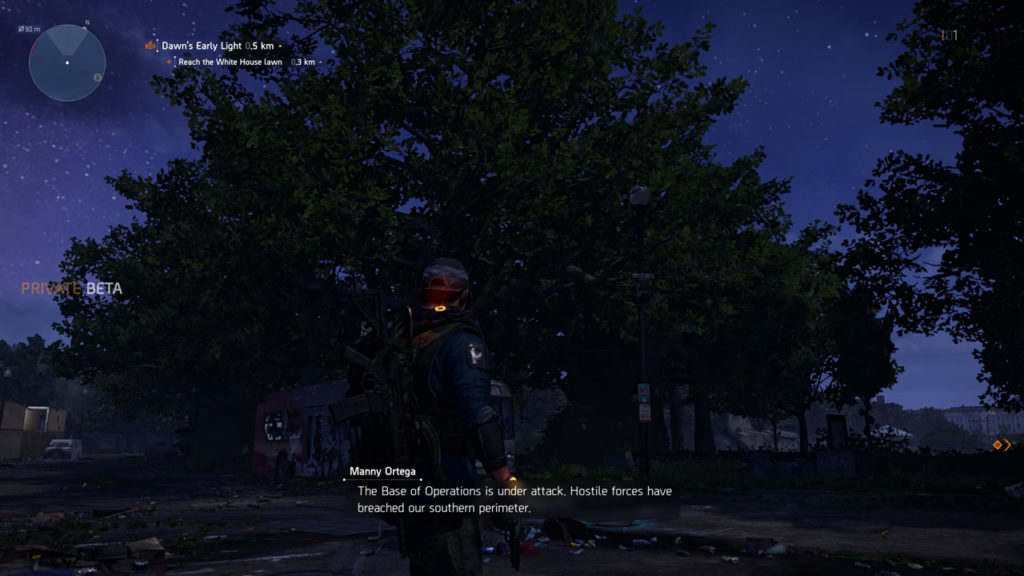 The Division 2 has some great visuals, I prefer greens than snowy textures, so this is a thumbs up for me. People may not like it as much and can see it as generic, but from what I can see, a desolated Washington D.C is worth exploring to say the least. The weather system is something I can commend when I have played this game, it plays very well on how you create your strategies for attack/defend. Interiors and safe places do not feel empty at all, and there are good variance of covers you can use which puts you in strategic places when fighting a bunch of enemies.

In the beta, we can explore a decently-sized area of the whole game. walking around seeing animals, or even patrolling enemies/allies that may turn into a bloodbath are the common sights in The Division 2. It feels alive when you see these things. You can see a couple of players here and there, and there are even SOS call for the players who are in need just in case you are being a good samaritan and wants to help other agents.

Unfortunately, as much as I like the game’s design overall, I cannot say the same for its character customization, which is beyond simple and boring. You can only randomize it, which reminds me of Grand Theft Auto V online where you have to pick your parents, which is not good in my honest opinion. The characters design are just not that good. 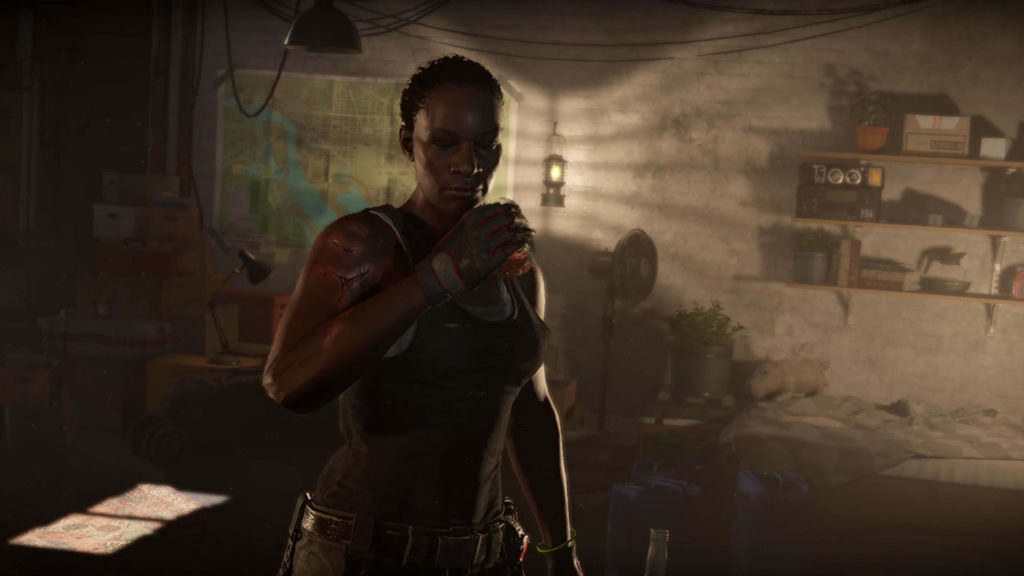 One of the leaders

The story right now is very vague, but one thing is for sure, you are needed in Washington D.C. It takes place seven months after the first game, and you are tasked to solve the problem of the capital and bring peace and order to prevent civil war.

There are two main missions where you have to save a community leader’s daughter and visiting Jefferson Trade Center for SHD tech. Honestly, I already forgot the objectives for those missions, but I believe you are tasked to open up the communications for the area I suppose.

I also kind of hate the fact that our characters are silent, or no choice given for the cutscenes. It makes me feel like I am an errand boy than an agent to be honest. 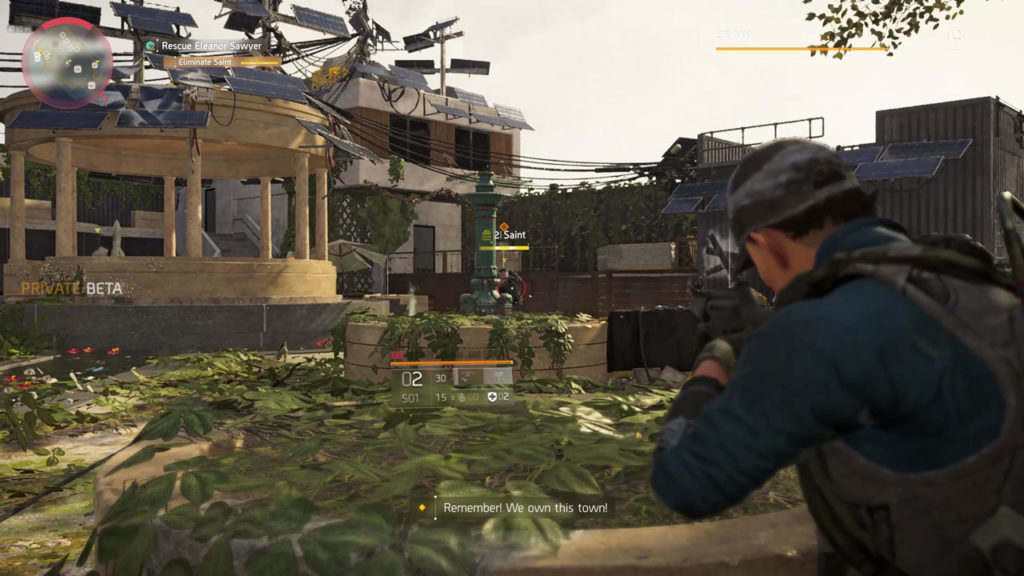 For the gameplay, as a looter-shooter game, bullet sponge is very normal. However, this used to be a huge problem for the first game based on what I have seen since no one can die so easily. Thus, Ubisoft decided to tone down the bullet sponges here in the second game. I must say, that yes, it is indeed a lot easier to kill here. However, it scales up depending on how many you are on the party. A lot of people have said that if you are playing 4-man squad, the bullet sponges are more apparent than when you are playing solo or duo. On hard difficulty, especially, even the normal variant enemies are harder to put down, which is downright annoying.

Speaking of variants, there are a lot of enemy variants here, some even have armors. Heavy armored enemies can not easily put down by chipping off his armor slowly, something that is not seen on the first game.

Gun play is very fun, though, and I commend them for being able to add realism to the guns and have a lot of variety of guns to choose from. AI are not dumb enough to run towards you (except with the melee guys), instead they try to flank you as much as possible. This forces you to move from one cover to another cover. The cover system works well as you can do it in just one click towards where you want to go next, while moving towards an adjacent cover is just as easy as just going towards the edge of the cover you are currently on. It can be a bit clumsy at times, but it always does its intended use.

I also like the fact that the health bar is not generating while engaged in combat. We have limited armor repairs that we may use once we are cornered, so use it wisely. Plus, the game wants to be tactical instead of being rambo, so props for the development team by not having regenerative health while fighting enemies.

Modding guns is probably its best feature, which makes the game more immersive by modding your favorite gun to be stronger, more efficient, and overall better. It requires a lot of items to make though, so be prepared to find those loots by exploring Washington D.C. 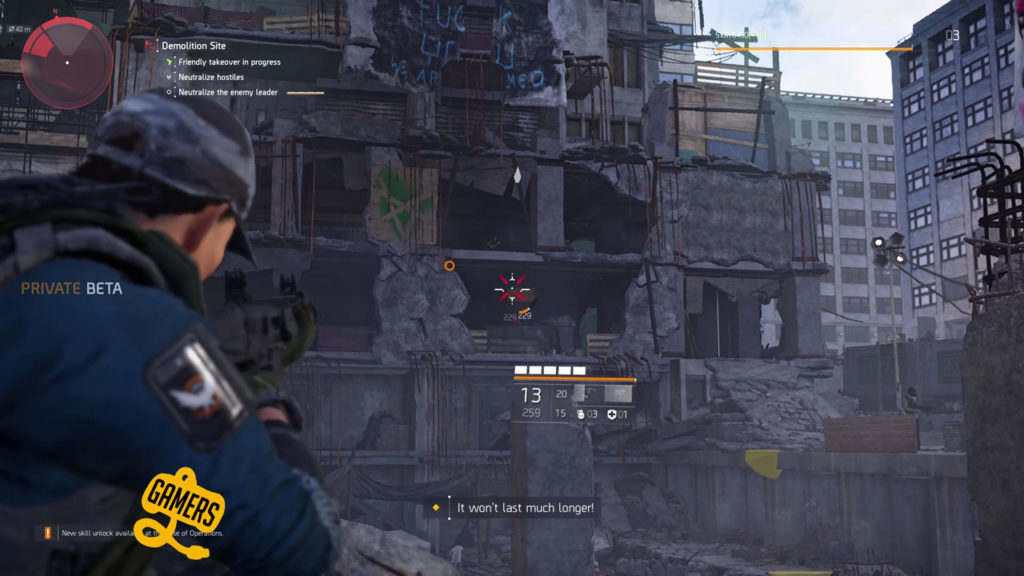 Fast travel is also a nice addition here, especially at launch when the map is atleast three times bigger than what we have in the beta. However, you can opt that one out and instead, do the side activities such as getting SHD techs or capturing points.

SHD techs-related mission rewards you with SHD techs, which can be used to gain perks and skills in the game. Perks are passive abilities, while skills are used manually. Skills have archetypes now, thus they can either be defensive or offensive. An example would be a drone, it can be an offensive drone which it explodes on a designated area, or defensive where it replenishes your armor slowly, even your allies.

Capturing points, on the other hand, rewards you with several items, including weapons and armors. You can get help from surrounding allies by firing a flare too. It is fun and you have to defend the point once you have captured it as well. However, allies populating the captured points need resources, which you have to get or otherwise, there may be consequences like enemies recapturing the area. 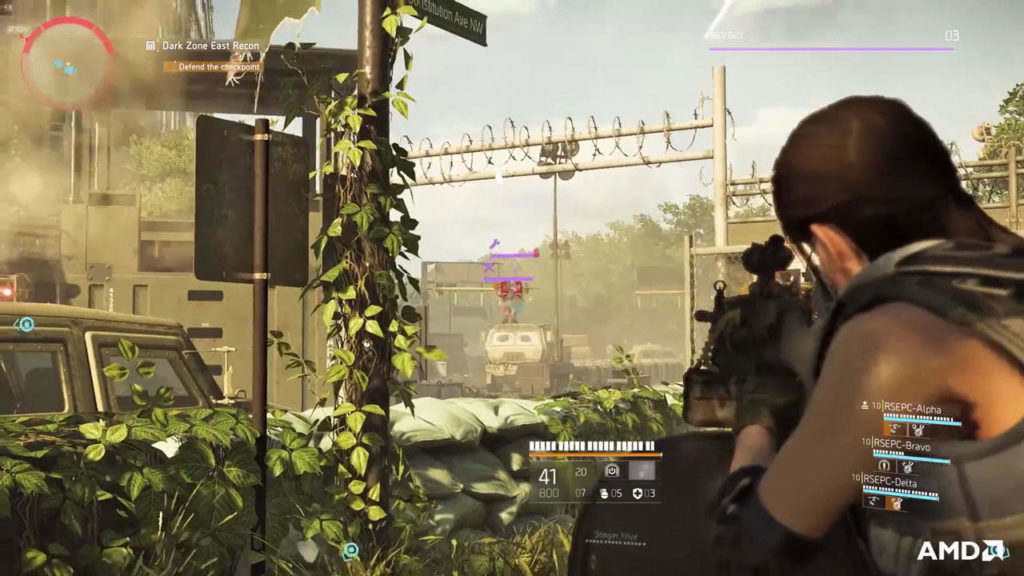 Dark Zones, one of the selling points of the first game, have been revamped here. The beta introduces us into one of the three dark zones, which is the Dark Zone East. Better loots can be found here, but you have to extract it. Extracting it calls upon all the nearby surrounding players which they may steal it from you for their own gains. After all, Dark Zone is PvPvE where there is no law governing it.

The rogue system has been reworked though, you can be just a thief, or you can be manhunt depending on what you do or how many you kill. Each has its own different objectives to complete before you can claim your rewards. The only concern I have here is Solo gamers cannot enjoy Dark Zone as much since Time to Kill is a lot quicker here than before. 1 versus 3 really has its disadvantage and you are amazing to come up on top if you try to be rogue solo player.

Another PVP mode is Conflict/Skirmish, it is a 4v4 matchup where it is just a basic PvP mode until you kill all of them. It is fun to play for quite a while, but you would probably prefer the Dark Zone for much intense gun fight and rewards.

These two, Dark Zones and PvP, are all normalized, hence, all of you are level grounded, although there are specific levels for Dark Zone apart from the level you have outside of it. However, at the end game, Occupied Dark Zone will be introduced where there are no boundaries and no normalization will occur at this state. 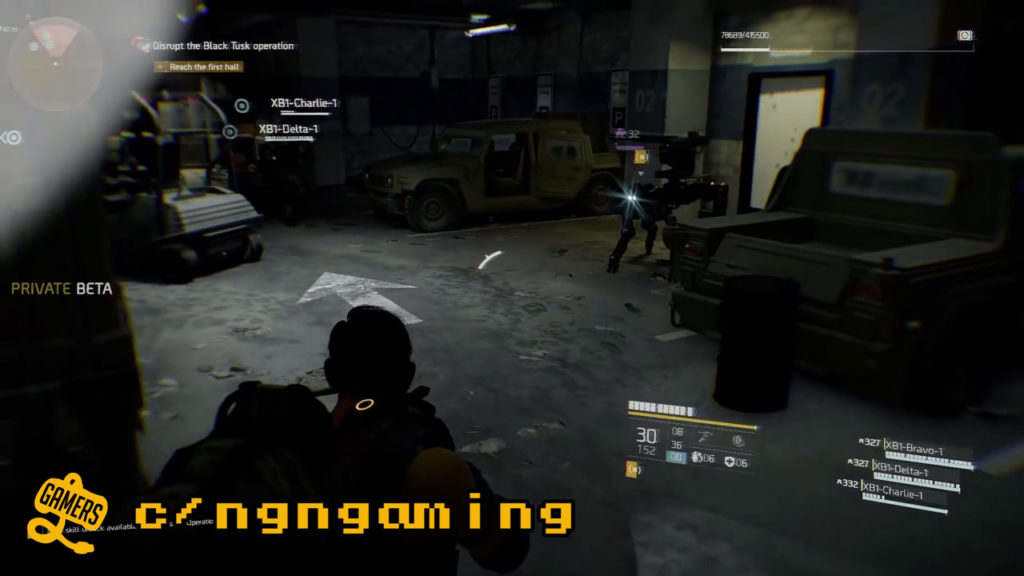 End game may be fun…?

The End Game introduces us with a new faction, Black Tusk, which are enemies with a bunch of health, armor, and have robots that can literally annoy you every single time. The end game is fun to say the least, but it is a different beast. Everything is harder to kill, as we all died at first on the Invaded Mission in the beta. We manage to finish it by trying and trying but the difficulty has been increased up two-folds.

This also introduces a Specialization once you reach level, which gives you a unique weapon and new set of skills specifically for the specialization you have chosen. The end game mission here is just a glimpse, so more may be in store once we reach it on the full game.

That is it. My impression for The Division 2 Private Beta. You can now pre-load the Open Beta, which will run from March 1, 2019 to March 4, 2019 to see if it is worth playing. You can also pre-order it here.

We are also giving away The Division on our website as well.

In Tom Clancy’s The Division®2, the fate of the free world is on the line.

Lead a team of elite agents into a post-pandemic Washington DC to restore order and prevent the collapse of the city.

The Division 2 is an online, action shooter RPG experience, where exploration and player-progression are essential.

Liberate Washington DC – Save a country on the brink of collapse as you explore an open, dynamic and hostile world.

Stronger with your team – Specialize and fight together with your friends in online co-op or against others in competitive adversial PVP mode.

Genre-defining endgame – Choose a unique class specialization to take on the toughest challenges with friends.