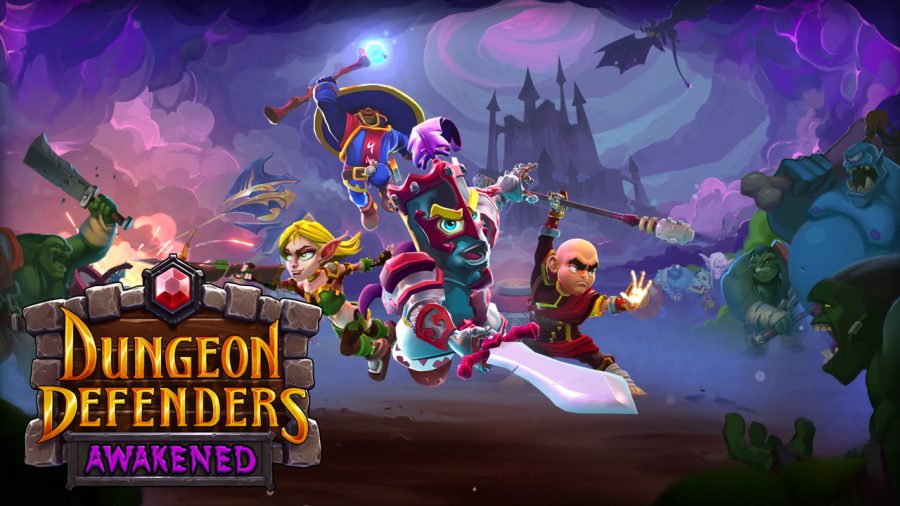 Looking for a tower defense co-op game? Chromatic Games’ Dungeon Defenders: Awakened is almost out of Early Access so we give you what we thought of it!

They recently announced that the game will fully launch by May 28, 2020, on Steam. Regarding the console release, I believe there have been delays so hopefully, it still gets released within this year.

I love the first game as it is one of the finest tower defense games I have played. Unfortunately, I got no time to play Dungeon Defenders II, so I cannot compare it to this game. Thus, I will focus on the first game when comparing this one.

Is this game good or at least better than its predecessors? We will find out!

Dungeon Defenders: Awakened is an Early Access game, and it has been out for more than a couple of months now. I finally played a few weeks ago, and thus, this is my impression since, as an Early Access game, a lot of things are changing every update. Regardless of that, I have seen the core foundation of the game, and it is promising. A final review would come out after the game is out of Early access though, so let us hope for the best!

Chromatic Games developed it on Unreal Engine 4, which gives us an updated look at the character models, the maps, and even the enemies compared to the first game. Dungeon Defenders: Awakened uses a different art style, and they have to remodel the characters and enemies. They even revamped the maps, and the tavern looks more unique and architecturally sound than before, and this is to be more consistent with the intended art style.

My issue here is, I love the first Dungeon Defenders graphics; it was a game that was released a decade ago, and it still looks great even today. Comparing the first two maps of the first game and Awakened, we can easily see that the old one looks a tad better. It looks more polished since it has a good blend of the models, the lighting, and the shadows, but it is also a lot darker.

In Awakened, it has improved lighting, the textures are of higher quality, and everything is more vibrant. However, something just looks peculiar to me. I cannot pinpoint the exact issues, but I think it is about the shadows, and the character models having a gloss effect to them. Hopefully, they can still add a few more touches for graphic improvement here and there before the final release, but seeing that this game will be out of Early Access this month, it may take a while to grow on you, especially if you are so used to Dungeon Defenders.

It is also pretty optimized for the most parts as I see little to no dips on frames per second when playing the game. Although, if you play survival and you reach the point where waves are literally pushing hundreds of enemies at once, and you see a lot of explosions and effects happening at the same time, then you may experience lag. OBS also does not seem to like this game a lot, especially in the tavern because I am getting a lot of encoding problems in the area when I am trying to record. It is bizarre stuff.

For the gameplay, you may select one of the four characters, which are the Huntress, Apprentice, Squire, and Monk. They are the staple characters from the two games. Although I really miss the Summoner as it is my go-to hero in the first game.

Each of the heroes has different skills and defenses. Squire is built like a tank and his defenses are more on attacking close or medium-range enemies. Apprentice’s defenses are more on dealing damages from far away and his skills are mostly to deal area-of-effect damage. Huntress is more on traps and is a good DPS hero. Monk is more on the supportive role as his defenses help improve existing defenses or weaken the enemies.

Anyway, we have four slots for the character deck so you can interchange each other seamlessly when you are on a build phase in a mission. This means that you can select four of them already to fill up the slots. I recommend you to do so because even if you do not actively play them, they will earn the same experience as your main hero does, so you can level them up in parallel.

For instance, I only upgrade my backup heroes’ defense or tower stats, so I can maximize their defenses while I upgrade the hero stats for my main one. This is very helpful in this game, especially if you plan to play solo, or with a friend.

There are three acts for the game’s story that consist of four maps each. There are new maps built from scratch, and there are old ones from the first game. I am not sure if the new maps in this game have already been created for the second game, but I highly doubt it.

For each map, the only goal is to defend the Eternia crystals, some maps only have one, and some have two or more. You see, each map has a distinct layout, which needs a little bit of time for the players to study how they will place their towers.

The final map for each act is the boss map as well, so it is technically the same from the first game, but with improved graphics. So far, we only have two bosses in the game, and if you have played the original, then you know how to defeat them. However, if this is your first Dungeon Defenders game, then here is a tip; each boss has a different gimmick on how to deal damage to them, so you just have to figure that one out. They do not attack the Eternia Crystal as they focus their attacks on you or your towers, and it is because you still have to stop the hordes from reaching your Eternia Crystal, which is why the towers and yourself are crucial.

Placing defenses or towers would cost you mana. You just also cannot put up one anywhere because we have limited numbers of defense points that we can spend, and it is usually around 60 to 130. Different towers have different numbers of defense points that they consume. For instance, Apprentice’s towers consume around three to eight defense points except for the shield as it only costs one. On the other hand, the Huntress’ traps only consume around three to five. In my experience, we tend to use all the heroes in placing traps on harder levels, but you can make do with one hero playing on medium or hard difficulty. With that said, it is the reason why I recommend selecting all four heroes in your character deck early in the game.

We also have a few game modes in the Early Access, which are Campaign, Survival, and Challenge. As mentioned earlier, Campaign is where you play the story mode, and all maps have 5 waves to complete regardless of your difficulty. Survival is the same except there are 25 waves, and it gets harder by around the 15th wave. Challenge is more of an experiment mode, and there are only two of them available so far. I really enjoyed all the game modes since tower defense is really fun for me. It is still a long shot when comparing how huge the first game is compared to this one, but let us hope it will change in the future.

I have spoken a little bit about the difficulty earlier, and I believe this game is a lot easier compared to the first one. I guess having a character deck that can level up all the heroes in it simultaneously really helped in creating a balanced gameplay, or at least an easier one. It just means that you can go back and forth with different heroes, and I do not think it is possible with the first game, or it would take you more hours to grind another hero just to do the same thing.

There is also no bank in this game, so you only have coins that you can use to upgrade your weapons and items. The store and the blacksmith are just non-responsive NPCs as of the latest update, but I am pretty sure they will be serving the players once the game fully launches.

Another difference I have seen is the lack of the chests around the map, you can only get one with a random loot each wave, unlike in the first game where you get at least four regardless of how many you are. However, I think what they changed here is you do not see the loots of other players, so everything you see on the ground is yours. I highly recommend you to enable auto pick-up on the settings because, for some reason, it is not activated by default. It just helps you focus more on things that matter because once you play on higher difficulties, there is a limited time for the build phase.

Items can be sold to gain money, and you can also filter them so you do not sell all of them accidentally. I praise that this game gives you a lot of loot of various rarities. Once you find your best gear later in the game, you can upgrade them to your own liking. Although you can upgrade lower tier items, I just do not really recommend doing it.

So is Dungeon Defenders: Awakened worth getting right now? Since I live in the Philippines, it costs around PHP830 which is around $17. It is less than half of the price if you live in the USA which is $40! Yikes! You may check steamdb.info to see the difference in pricing in every region, and the USA is one of the most expensive among all the countries listed there.

Anyway, if you backed this game up last year on Kickstarter, you probably just paid $15 for it. Additionally, you can get the full version of the first game including in that $15 early bird deal, so I cannot justify that they are selling this at $40. If you can get this game for $15 or $20, then it is worth that price.

Let me know what your thoughts are regarding Chromatic Games’ Dungeon Defenders: Awakened!